Using a mobile phone for more than 10 years increases the risk of getting brain cancer, according to the most comprehensive study of the risks yet published.

The study which contradicts official pronouncements that there is no danger of getting the disease found that people who have had the phones for a decade or more are twice as likely to get a malignant tumour on the side of the brain where they hold the handset.

The scientists who conducted the research say using a mobile for just an hour every working day during that period is enough to increase the risk and that the international standard used to protect users from the radiation emitted is not safe and needs to be revised.
They conclude that caution is needed in the use of mobile phones and believe children, who are especially vulnerable, should be discouraged from using them at all.
Cancers take at least 10 years and normally much longer to develop but, as mobile phones have spread so recently and rapidly, relatively few people have been using them that long.
Official assurances that the phones are safe have been based on research that has, at best, included only a few people who have been exposed to the radiation for long enough to get the disease, and are therefore of little or no value in assessing the real risk.

The new study headed by two Swedes, Professor Lennart Hardell of the University Hospital in Orebro and Professor Kjell Hansson Mild of Umea University, who also serves on the MTHR programme’s management committee goes some way to meeting the deficiency.

The scientists pulled together the results of the 11 studies that have so far investigated the occurrence of tumours in people who have used phones for more than a decade, drawing on research in Sweden, Denmark Finland, Japan, Germany, the United States and Britain. They found almost all had discovered an increased risk, especially on the side of the head where people listened to their handsets.
Five of the six studies of malignant gliomas, cancers of the glial cells that support and protect the nerve cells, found an increased risk. The only one that did not still found an increase in benign gliomas. Four of the five studies that looked at acoustic neuromas benign but often disabling tumours on the auditory nerve, which usually cause deafness found them. The exception was based on only two cases of the disease, but still found that long-term users had larger tumours than other people.
The scientists assembled the findings of all the studies to analyse them collectively. This revealed that people who have used their phones for a decade or more are 20 per cent more likely to contract acoustic neuromas, and 30 per cent more likely to get malignant gliomas.
The risk is even greater on the side of the head the handset is used: long-term users were twice as likely to get the gliomas, and two and a half times more likely to get the acoustic neuromas there than other people.

The scientists conclude: Results from present studies on use of mobile phones for more than 10 years give a consistent pattern of an increased risk for acoustic neuroma and glioma. They add that “an increased risk for other types of brain tumours cannot be ruled out.
Professors Hardell and Mild have also themselves carried out some of the most extensive original work into tumours among long-term mobile phone users and have come up with even more alarming results. Their research suggests they are more than three times more likely to get malignant gliomas than other people, and nearly five times more likely to get them on the side of the head where they held the phone. For acoustic neuromas they found a threefold and three-and-a-half-fold increased risk respectively.
They have also carried out the only study into the effects of the long-term use of cordless phones, and found this also increased both kinds of tumours. Their research suggests that using a mobile or cordless phone for just 2,000 hours less than an hour every working day for 10 years is enough to augment the risk.

Professor Mild told The Independent on Sunday: I find it quite strange to see so many official presentations saying that there is no risk. There are strong indications that something happens after 10 years.He stressed that brain cancers are rare: they account for less than 2 per cent of primary tumours in Britain, though they are disproportionately deadly, causing 7 per cent of the years of life lost to the disease. Every cancer is one too many, he said.

He said he uses a mobile phone as little as possible, and urges others to use hands-free equipment and make only short calls, reserving longer ones for landlines. He also said that mobiles should not be given to children, whose thinner skulls and developing nervous systems make them particularly vulnerable.
The danger may be even greater than the new study suggests for, as Professor Mild says, 10 years is the minimum period needed by cancers to develop. As they normally take much longer, very many more would be likely to strike long-term users after 15, 20 or 30 years which leads some to fear that an epidemic of the disease could develop in the coming decades, particularly among today’s young people.
On the other hand, the professor points out that the amount of radiation emitted by phones has decreased greatly since the first ones came on the market more than a decade ago, which suggests that exposures and risks should also be falling. But he still recommended choosing phones that give out as little radiation as possible (see below), and pointed out that people are now also exposed to many other sources of radiation, such as masts and Wi-Fi systems, though these emit much less than mobile handsets.
Britain’s official Health Protection Agency which has taken a cautious view of claims that radiation from mobile phones, their masts and Wi-Fi installations can damage health admits that the study may be indicative of a risk, but says that “such analyses cannot be conclusive.
The Mobile Operators Association said: This is not new data for the World Health Organisation and the many independent expert scientific committees who state that there are no established health risks from using mobile phones that comply with international guidelines.
Both sides agree that there is need for more research. Professor Mild said a possible link between mobile phones and Alzheimer’s disease should also be examined, since we have indications that it might be a problem as well as a possible link with Parkinson’s disease, which can’t be ruled out.
In the meantime, the scientists want a revision of the emission standard for mobiles and other sources of radiation, which they describe as inappropriate and not safe. The international standard is designed merely to prevent harmful heating of living tissue or induced electrical currents in the body and does not take the risk of getting cancer into account.
Professors Hansen and Mild serve on the international BioInitiative Working Group of leading scientists and public health experts, which this summer produced a report warning that the standard was thousands of times too lenient.
The BioInitiative report added: It has been established beyond reasonable doubt that some adverse health effects occur at far lower levels of exposure some at several thousand times below the existing safety limits. It also warned that unless this is corrected there could be “public health problems of a global nature.

Case study: ‘Mobiles are the smoking of the 21st century; they need health warnings’
Neil Whitfield, a 49-year-old father of six, developed an acoustic neuroma in 2001 after years of heavy mobile phone use, on the left side of the head, to which he had held his handset. He says he had no family history of the disease and that when he asked a specialist what had caused it, the doctor had asked him if he used a mobile.

I was on it four hours a day, easily he says. When I held it to my head, I could feel my ear getting warm.
He adds that he completely lost his hearing in his left ear and was off work for 12 months. Unable to go back to his old job in marketing, he became a teacher, suffering a &#321;20,000 drop in income.
It has had a devastating effect on my family, he says. Mobile phones are the smoking of the 21st century; they should have health warnings on them. You would never buy a child a pack of cigarettes, but we give them mobiles which could cause them harm.

Exposure to radiation, shown as Specific Absorption Rate (SAR) levels, varies widely in different models. Manufacturers and the Government have ignored the Stewart report that urges they be clearly marked on phones and boxes. They are thus hard to find, though the Carphone Warehouse catalogue includes them. An easily accessible list of phones and radiation exposures is published in Germany, where low-radiation models, defined as having SAR of 0.6 or under, are encouraged. 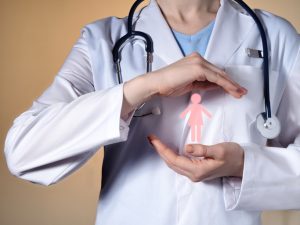 Medication for Most Common Gynecological Problems